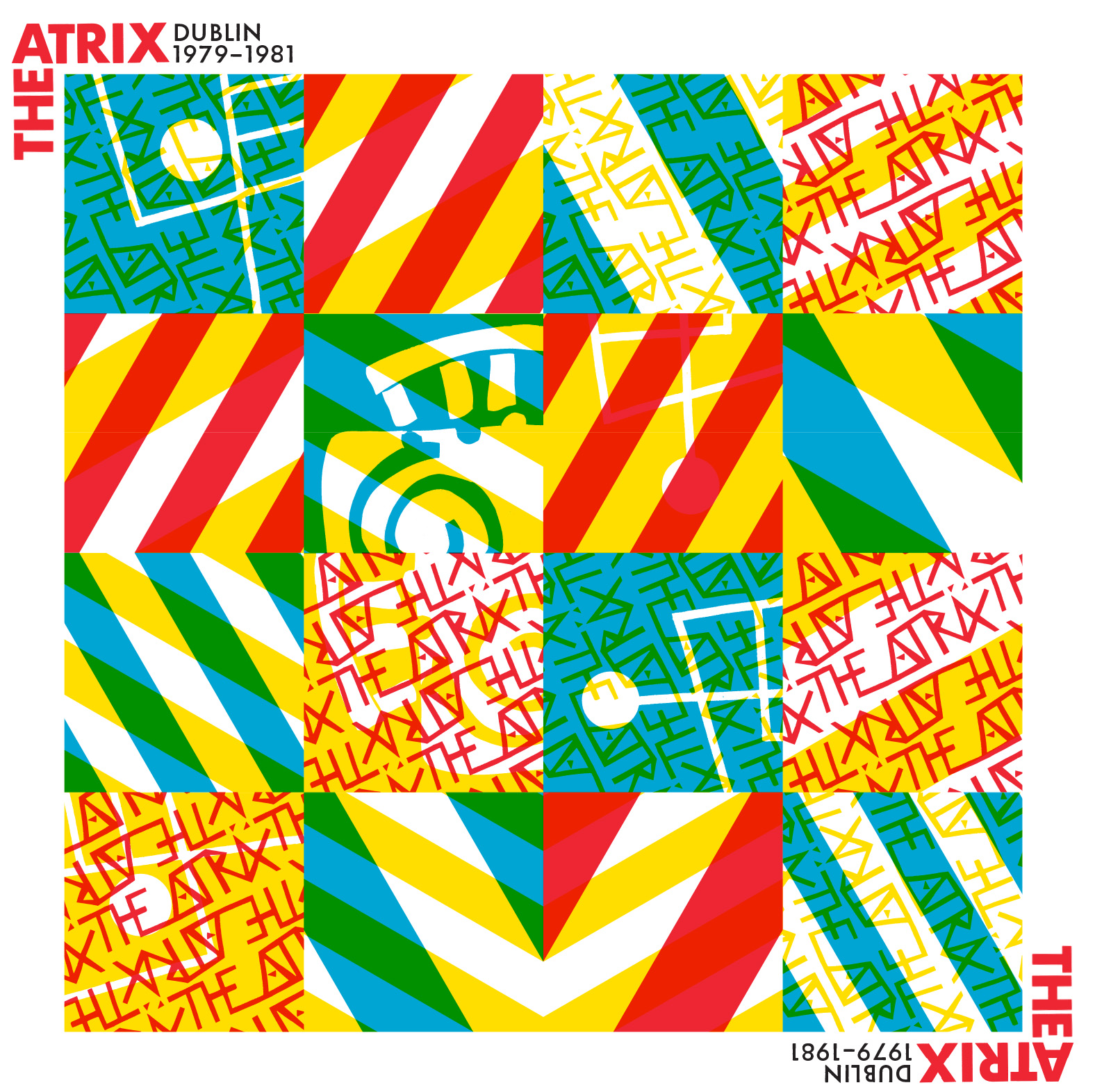 Legendary Dublin New Wave act, The Atrix, release their long awaited anthology, ‘Dublin 1979-1981’, on September 19th. To mark the release, the band will be staging a launch event in Dublin’s Sugar Club that evening.

The Atrix formed in 1978, and came out of the same Dublin theatre/cabaret scene as Jim Sheridan, The Radiators, Neil Jordan, Agnes Bernelle, Peter Sheridan and The Virgin Prunes. The Atrix combined a strong theatrical element to quirky but memorable tunes, the most striking examples being the singles “The Moon Is Puce” and “Treasure on the Wasteland”.

They released its first single “The Moon is Puce” on Seamus O’Neill’s Mulligan label in late 1979 to modest acclaim in its local market. This first single was produced by Philip Chevron, then a member of The Radiators From Space and later of The Pogues. The band signed to Dave Dee’s DoubleDee Records label in 1980 and released the follow-up single “Treasure on the Wasteland” in 1980. It was produced by Midge Ure. They released ‘Procession’, their only album in 1981.

Their single, ‘Treasure on the Wasteland’ appeared on the now legendary ‘Just for Kicks’ compilation album, which also featured, among others, Berlin, DC Nein, Rocky DeValera & The Gravediggers, and, a then virtually unknown, U2.

The bands frontman, John Borrowman, tragically passed away in Copenhagen in 1998.

A Biography by Declan Lynch…

There is almost no part of the glory of Ireland at a pivotal time, in which these men known as The Atrix are not present in some form. And it was indeed a kind of glory, given that there was so much to be against, before you could get to all the things you were for, which were usually coming in from Britain or America.

For The Atrix it would  be theatre first and then it was rock’n’roll, though in truth it was always some kind of rock’n’roll, from the moment in the De La Salle school in Finglas when John Borrowman approached Hughie Friel to talk about music and in that moment, their destinies were joined.  They were about seven years old at the time, when only about one hundred yards away from the street where they lived, other characters in this other Rising were literally being born in Cedarwood Road — Paul Hewson and Fionan Hanvey they were called, for a while at least.

And at some point during that strange little Renaissance, which was unfolding during the 1970s, there was a kid called Philip Ryan from Santry playing Bowie songs on the guitar in Hughie’s front room, visiting Hughie’s sister Valerie. Philip Ryan would become better known as Philip Chevron.

He would introduce Hughie to the work and to the phenomenon that was Agnes Bernelle and to the music of Brecht and Weil – it was beyond theatre, maybe even beyond rock’n’roll, yet these lads in the northside suburbs of Dublin could feel its twisted greatness.

Another friend from up that way, a piano player called Chris Green, was in there too. They knew they were on to something, even if they couldn’t quite figure out what it was.

Hughie became involved in an outfit called the Children’s T Company along with Neil Jordan, Jim Sheridan, Desmond Hogan, Vinnie McCabe, Garrett Keogh, Paula Meehan, Ruth McCabe – not just a collection of remarkable individuals there but remarkable too for the fact that they were performing in schools and receiving an actual wage funded by bodies such as Dublin Corporation and the Arts Council.

That did not last long, but the fact that it lasted at all is the miracle. Alternative sources of energy were also to be found in the vicinity of the Project Arts Centre, with Hughie working on the set design for Jim Sheridan’s play “The Risen People” and as an actor in Peter Sheridan’s “The Rock’n’Roll Show”, which was both theatre and rock’n’roll and which featured among the contributors the name of Paul Cleary. Likewise, Borrowman was a stage manager for the ambitious Irish Theatre Company, touring with Emmett Bergin, Tom Hickey, Godfrey Quigley.

But the glory was not going to be emerging from the theatre or from literature. It was going to come from this tremendous noise that roared out of London and New York circa 1976. A great howl of insurrection that was reaching Dublin too at a time when Hughie Friel was playing drums in the Slow Motion Orchestra that had a residency in the Pembroke Inn every Thursday night, with Neil Jordan, late of the T Company, playing saxophone. And Borrowman, too, would be there or thereabouts.

They were jazzy, improvisational, but that was all over now.  Hughie went along to the Junior Common Room in Trinity College to see The Radiators From Space and knew that he had to be in some such band. There was no other way to live. On guitar, The Radiators had the kid we last encountered in Hughie’s front room, playing Bowie songs, somehow making his own connections with the Berlin cabaret of the 1930s. Now he was a punk rocker, and he would soon be seen on the cover of an early edition of the new Hot Press magazine, bound like The Boomtown Rats for the promised land of London.

Knowing that they were on the right side of history and right about most other things too, in 1978 Hughie Friel, John Borrowman, and Chris Green formed The Atrix. They would eventually be joined on bass guitar by Dick Conroy, who responded to a recruiting poster which featured a picture of the three Atrix alongside a silhouette of the fourth and a question : “Space Player : Can You Fill This Bass?”

Conroy came to the house in Number 2, Beresford Place in which the band was living and rehearsing and played the bassline of Elvis Costello’s “Watching the Detectives”. He got the gig right there, with this group that was devouring the music of Talking Heads and XTC and Joy Division, that had already devoured anything that was any good and which they had found by accident on the wasteland in the Ireland of their youth.

That house in Beresford Place, near Busarus, a mostly derelict building that by a stroke of fortune they were renting for a tenner a week, was where they truly became a band, jamming and writing songs and feeling that they might be a special group.  And not just a singular group, but one of several bands, the names of which were always being rattled off together at that time as part of a perceived Dublin punk and “new wave movement”, The Vipers, The Radiators, The Blades, DC Nien, U2, The Atrix….

And there was an artist called Brian Kelly who used to do the posters for the Slow Motion Orchestra, whose work so impressed The Atrix that they recruited him as a kind of a fifth member of the band to do all the artwork. Until then they would all be doing a bit of everything, but now they would be specialising.

Billy McGrath became their manager, having started out with Stagalee, a superb Irish funk band, which was an unusual enough thing in itself but not as unusual as The Vipers, The Radiators, The Blades, DC Nien, U2, The Atrix…

Stagalee indeed had played at one of the seminal events of this time, the Dalymount Park festival of 1977 headlined by Thin Lizzy,  who were supported by Graham Parker and The Rumour, with further down the bill the Radiators From Space and the Boomtown Rats who were about to appear on Top of The Pops later that week doing “Lookin’ After Number 1”.

I might also add that, in time, Billy McGrath would be the first “alternative comedian” I saw standing up on a stage in Ireland. But that time had not yet come.

For now he was booking The Atrix as support to The Undertones in McGonagles, a magical night.

They played the famous Carnsore anti-nuclear festival and Christy Moore enjoyed them so much he gave them a barrel of Guinness. Their sound engineer for the day was Nicky Ryan, who was also most encouraging, and whose superior abilities in sound production were eventually known to the world through the music of Enya.

The first single, “The Moon Is Puce”, was released on Mulligan, which had also released “Lookin’ After Number 1”. It was produced by Philip Chevron (there were red and yellow chevrons in Brian Kelly’s sleeve design, oddly enough) and it actually got played a lot on national radio, a strange new environment for members of this “new wave movement” who were more accustomed to bringing their demo tapes to Dave Fanning at dead of night, as he did his show in the pirate radio “studio” of Big D. They might even have got an instant review from a frequent visitor to those premises who lived nearby in Earlsfort Terrace, the great Bill Graham.

The best energies were with them now. They were playing McGonagles regularly, and in the fullness of time they would eventually be facing decisions like, who would they prefer to support on a tour of Britain, the Boomtown Rats or Simple Minds? They would go for the ones who had just had a monstrous hit with “I Don’t Like Mondays”, which they could listen to on the tour bus using this new thing called the Sony Walkman, and it would be great, even on the night in Manchester when the NME gave them a better review than the Rats.

The best energies were with all of these new bands, who were not just creating their own identities, they were feeding off each other – The Atrix were blown away by the Radiators’ album “Ghostown”, because it was produced by Bowie’s man Tony Visconti, mainly because it was magnificent.

They all went together in a boat to London, The Atrix, DC Nein, The Virgin Prunes, U2, as part of the Sense of Ireland festival organised by John Stephenson, and on St Patrick’s Night in The Venue there was a cataclysmic gig which finished up with Philip Chevron singing a version of “Television Screen” featuring Hughie Friel on drums, Adam Clayton on bass, and Rory Gallagher on guitar. Eventually the management tried to bring the curtain down but Rory just kept playing.

Midge Ure came to The Atrix new home in Ringsend to produce the single “Treasure On The Wasteland”. He played them this track he had just done called “Vienna”, which he had no immediate plans to release , happy to be involved with The Atrix, and they with him. John Leckie, who had been an engineer at Abbey Road with Pink Floyd, a producer of XTC and later of Radiohead and The Stone Roses, would produce the album “Procession”.

But in the end the story of The Atrix is not to be found in discographies or in the footnotes of the music business. It is a story of friends who followed their best instincts in an Ireland that did not encourage such adventures, of friends who became artists together, who found this thing that worked beautifully for a while, who were always bringing plenty to the party.

And when the party was over, there was much that they left behind them.